So what’s this “Devugees” thingy about and what’s InVision got to do with it?

Above all, it’s more than just a play on words between Refugees and Development. The DCI - Digital Career Institute - created the Devugees training program for refugees, interested in a technical qualification for the German job market, while facilitating their integration into German society.

On the other hand, we at InVision are always looking for highly skilled and easy to work with colleagues to join our team. That being said, we couldn’t care less about where you’re from, what skin colour you are or the skeletons you might have in your closet… On second thought, we might want to reconsider the latter 😁

What’s really important to us, is: Do you fit the team? Do you have the spirit we’re looking for? Is your aptitude, your demeanour, your work ethic compatible with the way we work and think? Do we speak the same language? Btw: German is a must 😉

So how did we come together?

Last week, Eckhard, who’s been with the DCI since about a year now, dropped by our Düsseldorf HQ with a group of 12 participants, currently attending a 4-week orientation course at the DCI to find out which “digital career” path they could imagine for themselves.

Among this group, were guys and girls of various age groups and from different countries, such as Afghanistan, Chile, Egypt, Germany, Greece, India, Italy Syria, Tunisia, and Turkey. Some of them had already been working in IT “back home” since a couple of years and knew exactly what they were talking about, while a few only comprised somewhat IT-knowledge and others were curious to find out what kinda IT-job could be suitable for them? 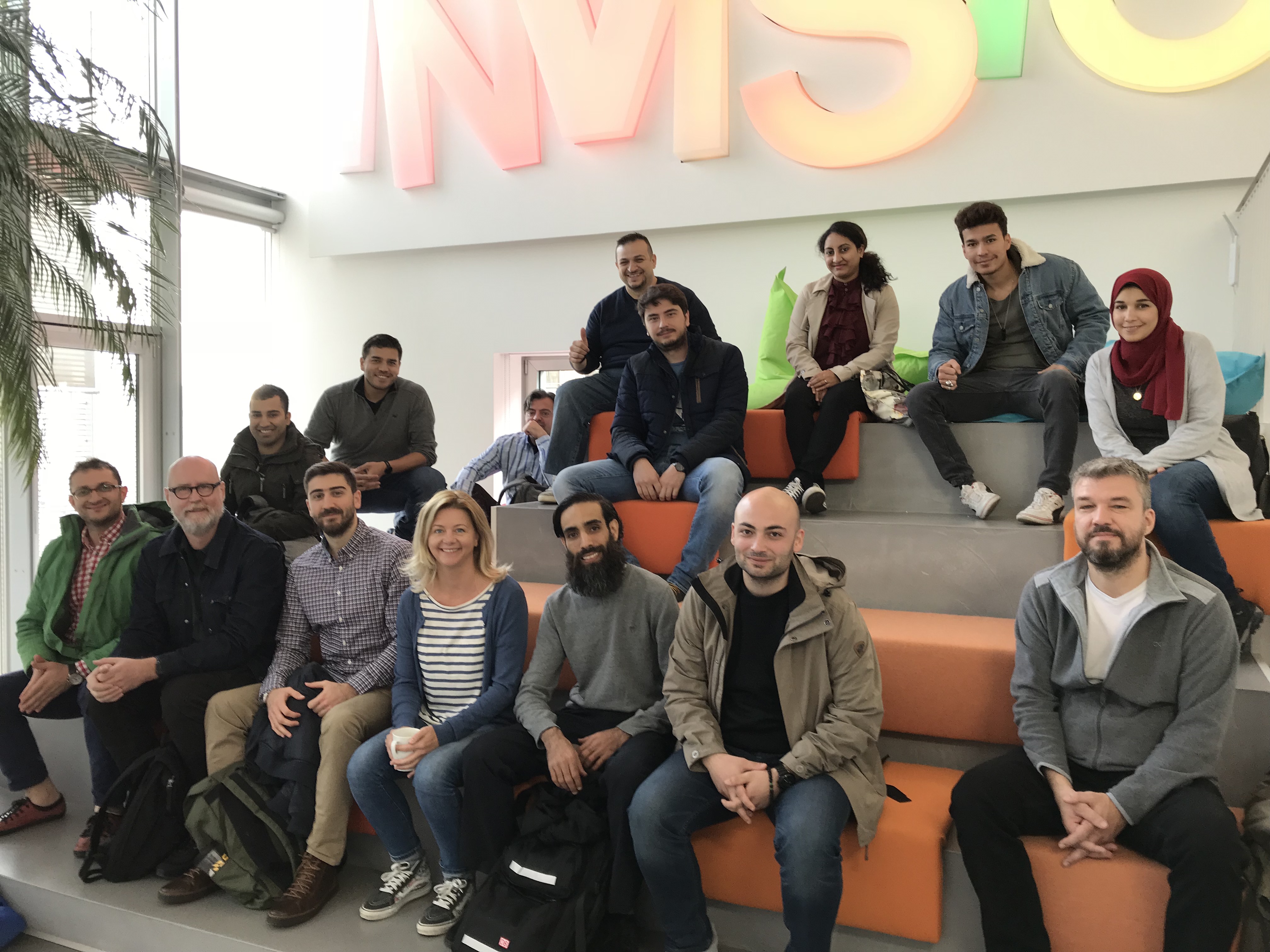 And what happened then?

After a brief welcome by Steffi - btw, she hates holding early morning presentations, but still did really well - in which she ran our guests through the company’s history, explained what we do, how we work and how we got there, we continued with an office tour, including a short introduction by every visitor - including Fahed, who showed up just in time to introduce himself 😜 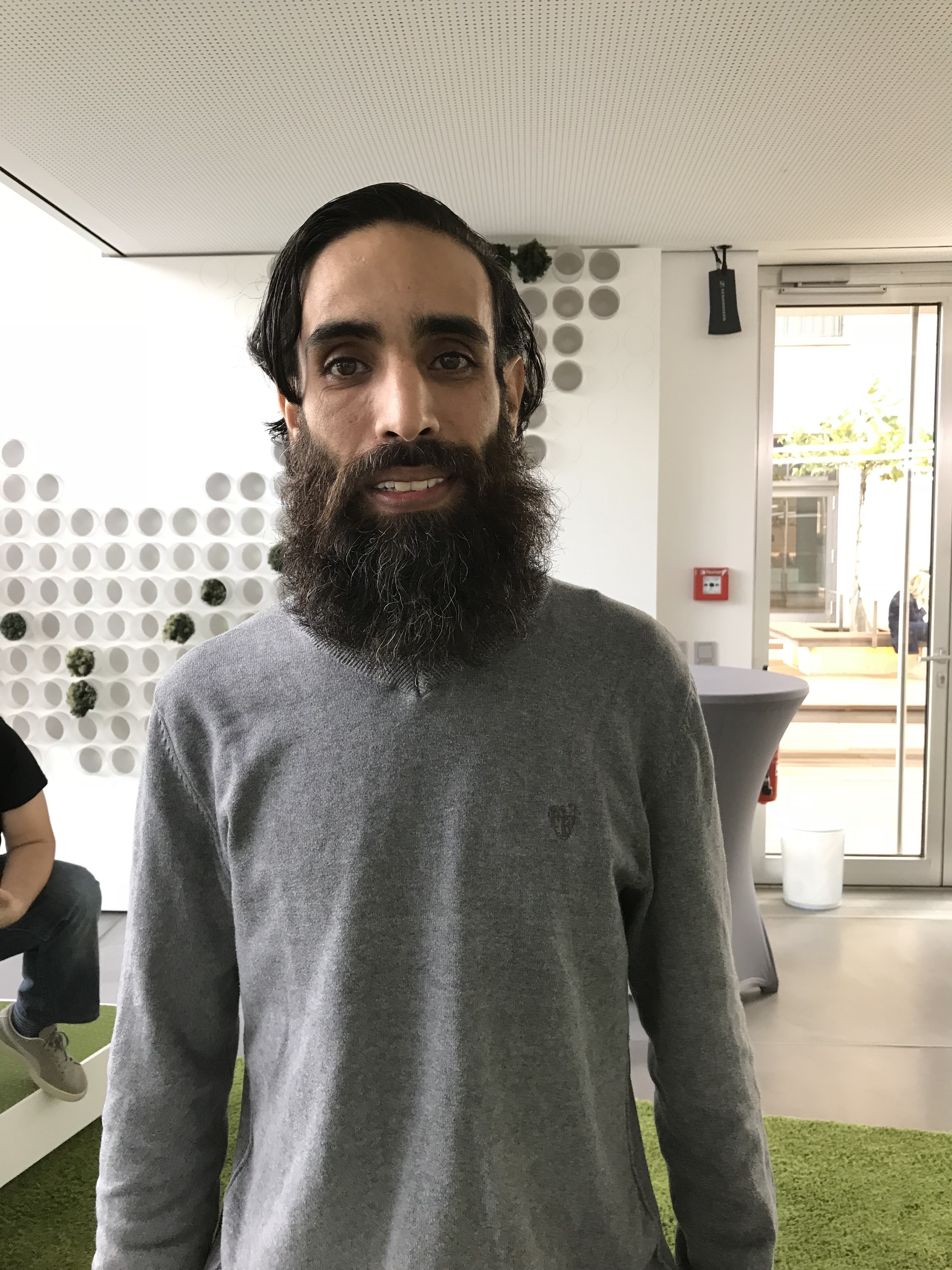 As our HQ building was designed to encourage utmost communication and transparency among the teams, what you’re not gonna see are: cubicles, lavishly decorated corner offices or fixed-line telephones, to name a few. What you’ll find instead, is an open and inspiring work environment spread across 7 individually decorated levels, displaying various themes such as space, jungle, beach or forest, aimed at providing employees with everything they need to go about their work in a self-organized, motivated and inspired manner, period.

After climbing down from the 7th floor, with brief stops on levels 6,5,4,3,2,1 and explanations on what’s happening on the respective level, we finally reached the ground floor - home of the #DigitalGarden, our very own in-house high-tech kickass state-of-the-art event space.

Steffi couldn’t help herself than to hit our visitors with a final sermon - poor guys - before they finally got the chance to grab a well-deserved refreshment.

Just when you thought it couldn’t get any better

Shy at first, our guests opened up surely but slowly and were keen on sharing their personal story to be published on our blog. After picking one of them, Patrizio from Italy, to find out more him and what his story was, I realized some of our guests had formed a queue to have a word with me - not that I’m a well-known journalist, blogger or anything of that sort - I’m just the events guys at InVision. 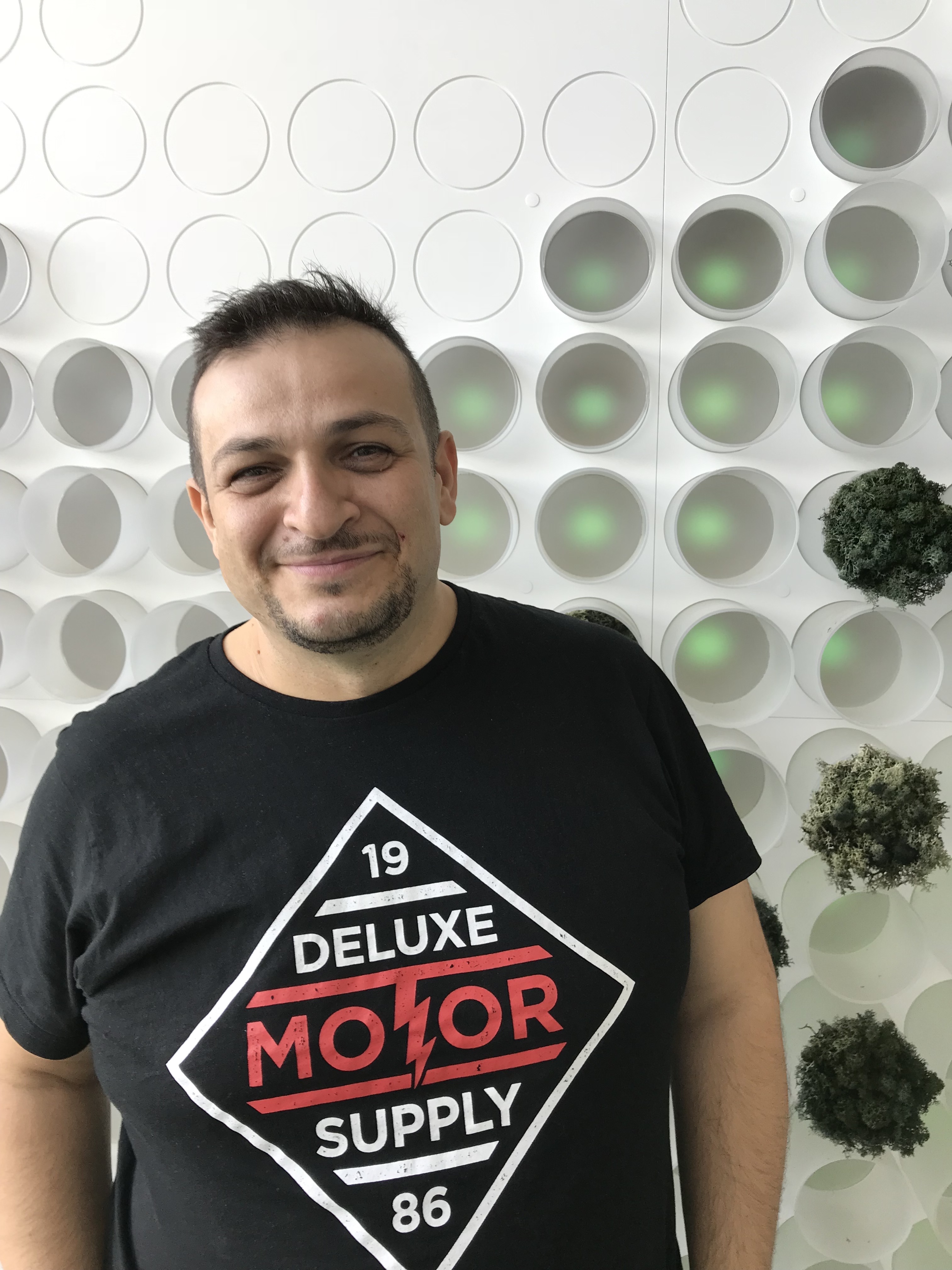 As mentioned, the first guest I spoke to was Patrizio (41), who’s been in Germany for 5 years and has worked various jobs, including a 10-year stint as a financial controller. Patrizio began a 3-year dual curriculum as a software engineer back in Italy at the age of 18 and worked in that field for approximately 5 years.

Despite enjoying his profession at first, Patrizio was unhappy at some point, having to cope with constant pressure and long working hours, making him reconsider his decision. Given that, he went on to pursue a career as a financial controller. Even then, his passion for software engineering never subsided. On the contrary, our buddy from Italy is an absolute autodidact and continues to further his coding skills till date.

Moreover, despite his skills and coding passion, Patrizio took on a job as a nursing assistant in which he worked for 1.5 years, but had to resign from after back-pain issues. One may consider this a blessing in disguise, but it seems that our Italian Stallion can finally go back to doing what he loves and perhaps fulfil his dream of working at Google one day.

Pretty much the opposite of Patrizio was my fellow Indian’s story, Deeksha. Deeksha’s been in Germany for approximately 1.5 years now and is a recruiter by profession. Since fluent German is mandatory in her field, she can’t even secure an internship. But instead of being frustrated, giving up or just lazying around, Deeksha’s decided to explore her options and find out how the DCI could support her in her pursuit. 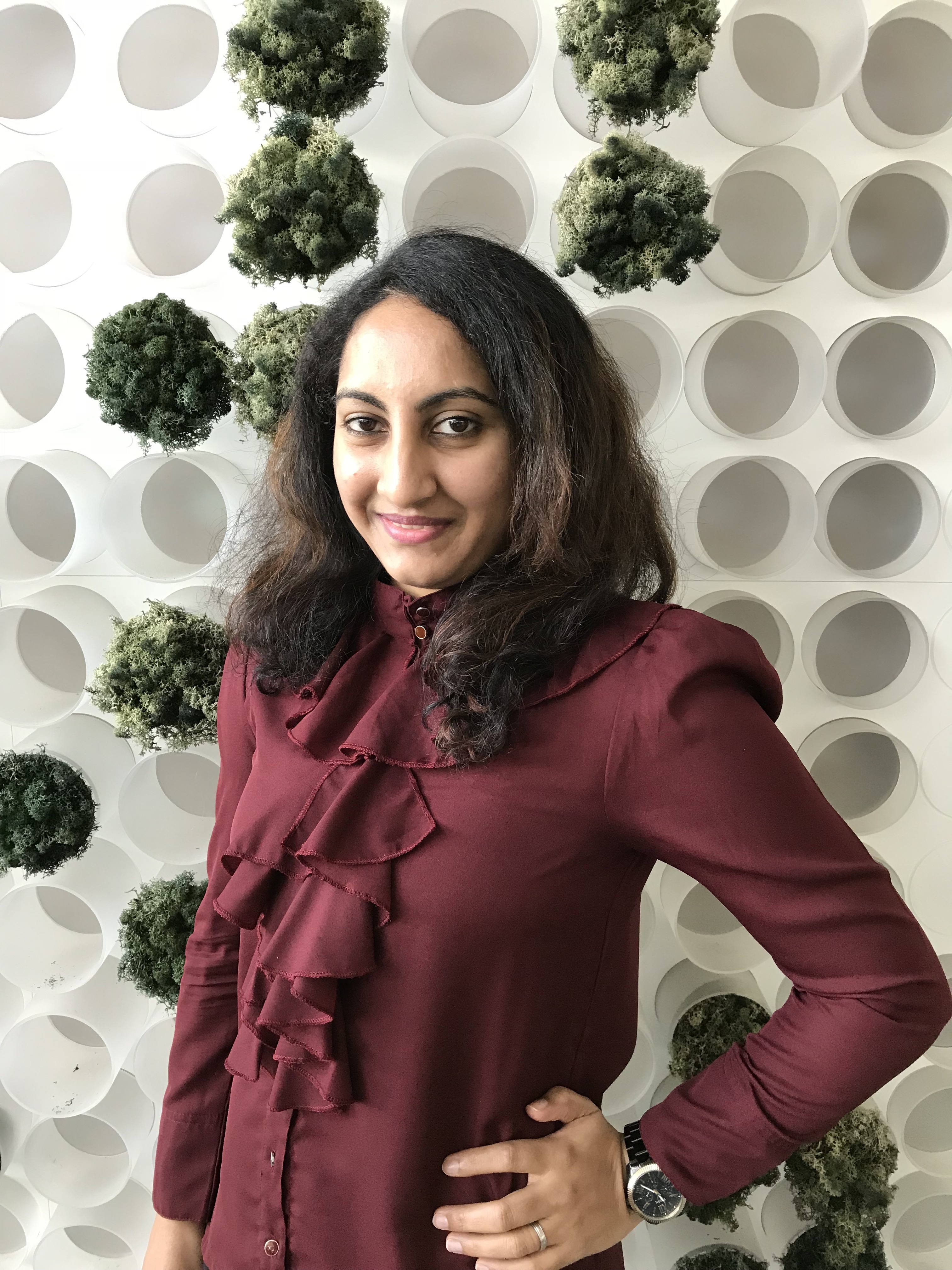 Obviously, her idea of looking into career options in the IT-sector didn’t just pop-up out of the dark. Her husband’s been in Germany for 5 years, working as an SAP consultant in Mönchengladbach. Although she has no IT-background, it seems she’s quite intrigued by the IT-sector from what I can tell. When asking her why she was considering setting foot in IT, she couldn’t tell me why, but at this point it seemed to be the right thing to do.

Now, I know what you’re thinking: IT and Indians - just like peanut butter and jam - they don’t work without each other. And while we’re unsubtly stereotyping here, how about this? Imagine a Philippino dressed in a kilt? :))

Who else did I talk to?

At the end of our guests’ visit, I felt bad not being able to hear to each everyone’s story, since I sensed all of them were very enthusiastic about sharing their experience with me.

As I had to choose among our guests, I decided to go with Mazin (32), engaged, from Aleppo. Mazin’s been in Germany since 2015 and holds a higher national diploma from the Syrian Virtual University in IT as well as a degree in computer science from Edexcel University (UK). Moreover, he has had both degrees recognized by ZAB (The Standing Conference of the Ministers of Education and Cultural Affairs).

Prior to touching base in North-Rhine Westphalia, Mazin’s first destination after immigrating to Germany was Bavaria - his opinion on the “Freistaat” wasn’t all that. Despite being of Indian descent, but growing up in NRW and having lived in various parts of Germany, I instantly knew what he meant, so welcome to lovely NRW, Mazin. 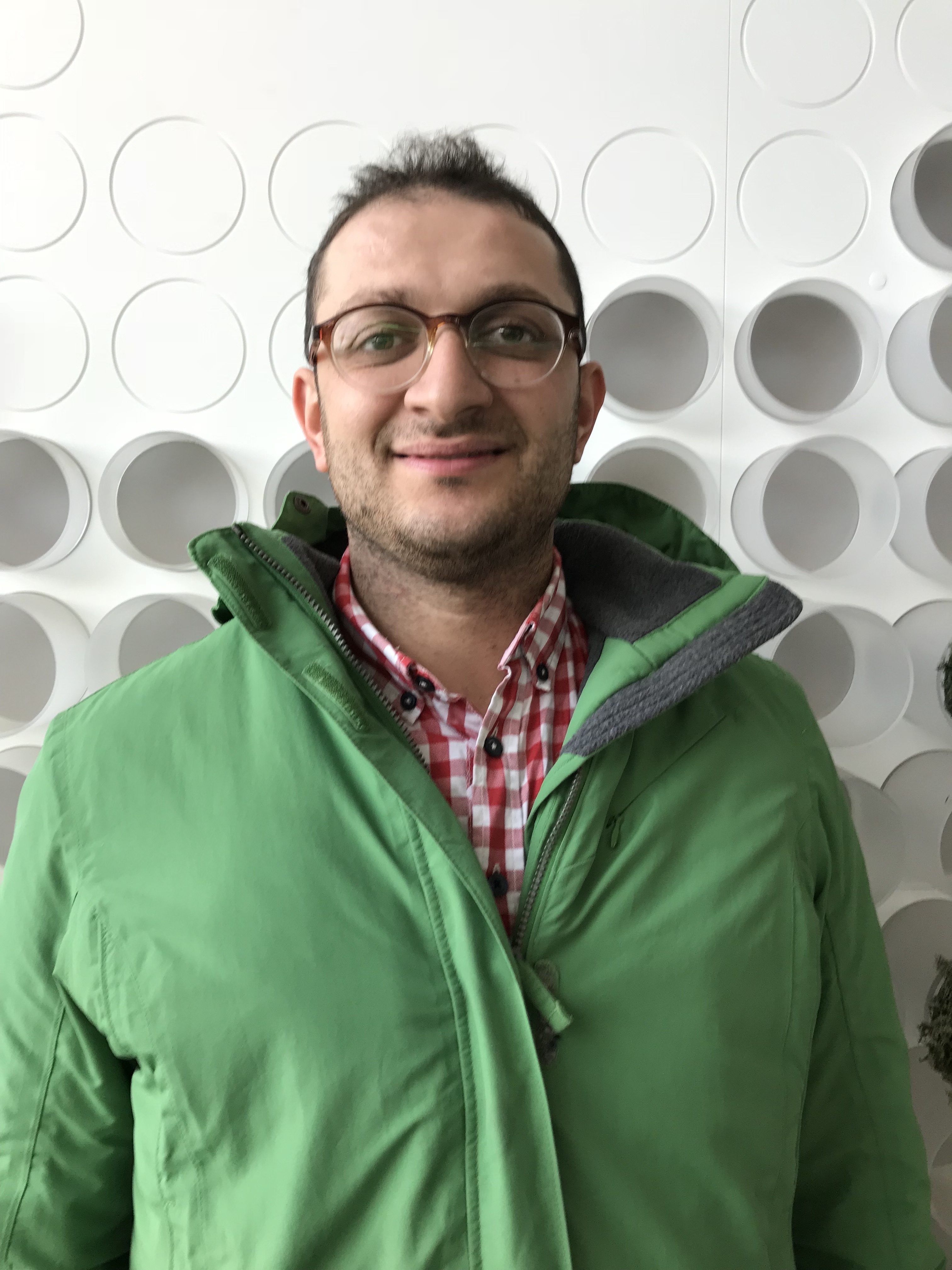 So how do I feel about all of this?

After letting all of this grow on me, I consider myself very fortunate and privileged having grown up the way I have and moreover, being able to pursue a career of my choice, in an environment enabling me to thrive and grow personally and professionally.

When Ravi's not managing events at InVision, he's probably busy putting together his colourful wardrobe